If you’re one of the many thousands of men living with pearly penile papules, you’re likely inquiring about papule removal. Perhaps someone you’ve confided in swears by the effectiveness of certain PPP removal home remedies. Maybe you’re wondering how PPP removal works or perhaps you’re asking yourself what the side effects might be.

At the PPP Clinic, we understand the frustration and concern that many of our clients experience. To help put your mind at ease, we’ve compiled a list of some of the most common questions that we get asked. Hopefully, some of the answers will give you a better understanding of penile papules and help to ease your mind a little.

What are the side effects?

As with any procedure, there is always the risk of side effects. PPP laser removal and removal using electrosurgical instruments is no different. In the case of PPP removal, the side effects are minimal, and the procedure itself is incredibly safe.

How long do Papules last?

Do pearly penile papules last a lifetime? The answer is – yes, they do. If you have papules and do nothing, they won’t disappear by themselves. Only with professional intervention can you be rid of them for good, so make sure you book an appointment with the PPP Clinic today.

How are they Removed?

Pearly penile papules must always be removed by an experienced practitioner – never at home by yourself. The most effective way to remove papules is through surgical destruction. The end of the penis (corona of the penis) is anaesthetised using a topical gel or cream, which usually takes around 15-30 minutes to take effect. Once anaesthetised, the patient won’t feel any pain or discomfort.

The answer is – yes. They are as common as the question posed above. In fact, they are far more common than many people realise, occurring in 1-5 men, which equates to roughly 20% of the male population. Of those with pearly penile papules, only half are of a size which is embarrassing enough to warrant PPP laser removal.

Dr Joshua Berkowitz has removed thousands of papules over the last 20-30 years. Papules are one of those things that are often left unsaid. Men rarely speak about it with other men and seldom mention it to women, and so the problem is deemed far less common than it actually is. Those who approach the PPP Clinic to get rid of PPP are always grateful, as our treatments help to alleviate what is, otherwise, a stressful burden to bear.

The short answer is no; they do not work. Home remedies are nearly always ineffective and invariably delay the patient seeking a proper diagnosis and treatment. Most of the time, those who attempt PPP removal at home are exposing themselves to further harm and even the risk of infection. There are thousands of “remedies” available, and these include:

All of these remedies are nothing more than a waste of time and money. The only way to get rid of PPP is through surgical destruction, so make sure that if you need papule removal, you get in touch with the PPP Clinic.

What should I expect?

When you first arrive, it’s not uncommon to feel nervous and to experience anxiety prior to treatment commencing. Often, patients will question whether this is the right course of action, so our team will do their best to reassure you that you’re doing the right thing. During the consultation, the doctor will explain the process and show you photographs so that you have a better understanding and are sufficiently reassured.

The procedure itself is painless and, once completed, the majority of patients leave feeling relieved and filled with confidence. The healing process usually takes around 2-3 weeks. Post-operatively, patients can expect to feel liberated as they regain their personal and sexual confidence.

How long is the recovery time?

Following the removal of pearly penile papules, the patient will usually require around three weeks to recover fully. This can be shorter in some cases, though the recovery period rarely exceeds the three-week mark. There is usually no pain during this period, and each patient will be provided with precise instructions to follow in order to ensure that everything heals correctly. All instructions will be provided in writing by the doctor that carried out the treatment.

Furthermore, patients will be given the doctor’s telephone numbers in the event that they have a question or that there is a problem or concern. 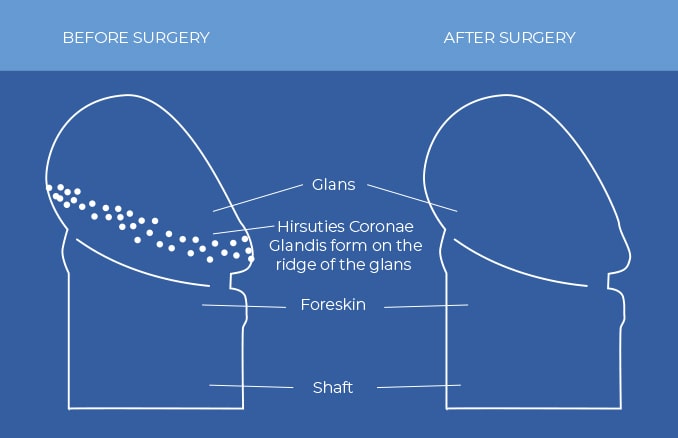 You can email us info@pppclinic.co.uk alternatively fill out our appointment form!

You will be seeing senior doctor, who will answer all of your questions and concerns regarding PPP. Treatment can be performed at the clinic on the same day if you wish. Consultation fee is £250 but is deducted from the final cost of £895 (if treatment is carried out on the same day.)

After the 60 minute simple and safe treatment, you can continue your normal routine immediately after the procedure.

This website uses cookies to improve your experience while you navigate through the website. Out of these, the cookies that are categorized as necessary are stored on your browser as they are essential for the working of basic functionalities of the website. We also use third-party cookies that help us analyze and understand how you use this website. These cookies will be stored in your browser only with your consent. You also have the option to opt-out of these cookies. But opting out of some of these cookies may affect your browsing experience.
Necessary Always Enabled
Necessary cookies are absolutely essential for the website to function properly. This category only includes cookies that ensures basic functionalities and security features of the website. These cookies do not store any personal information.
Non-necessary
Any cookies that may not be particularly necessary for the website to function and is used specifically to collect user personal data via analytics, ads, other embedded contents are termed as non-necessary cookies. It is mandatory to procure user consent prior to running these cookies on your website.
SAVE & ACCEPT